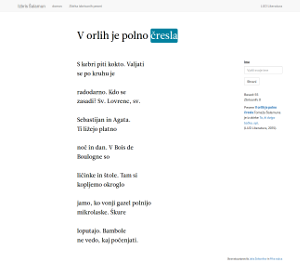 Web page for creation and archiving of erasure poetry made from poems of Tomaž Šalamun (From two poetry books: Letni čas (LUD Literatura, 2010) and Ta, ki dviga tačko, spi (LUD Literatura, 2015)). Co-author: Andrej Hočevar. This project is in Slovene only.

Small networked and sound e-poetry work. Its expression is based on the juxtaposition of changeable (latest twit related to a kiss) and permanent content (a child's giggle).

More Sara's Giggles is a technical update an older similar work (Sara's Giggle, April 2009) that became obsolete due to change in Twitter API. Conceptually it's the same as its predecessor. 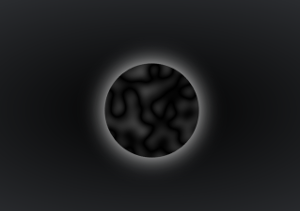 SX is an animation done with HTML5, JavaScript and CSS3, the Perlin noise was used (author: Ken Perlin).

Typed text is displayed in the ascii art pattern. Over the text the animated letters of the alphabet are shown and hidden, according to the typed text. Also sounds of typewriter are triggered.

Asciidarij 2 is based on the older, technically obsolete work Asciidarij (2001, titled Typescape in English version). Asciidarij 2 recapitulates basic concept, elements and functionalities but it is not identical to the originating poem.